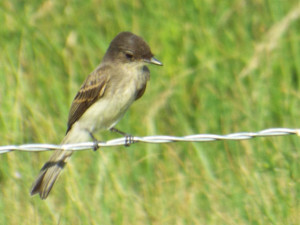 The wonder of uncertainty. I saw this little fellow at Travis Farm Park, an open field small park in Murphy, Texas. I puzzled over it a bit. It lacked the white tail's end of an eastern kingbird. It seemed not quite right for an eastern phoebe.
Then I decided its wing bar must make it an eastern wood pee-wee. But I lack certainty.

Now the movie"Pop Gear", under its American title "Go Go Party", is coming on the movie channel. It stars emcee Sir James Wilson "Jimmy" Savile, who, after his death turned out to be implicated in serial persistent sexual abuse of under-age kids. I've believed for some time that the coming years will disclose far more of this form of misconduct, particularly among celebrities from the "swinging sixties" and "super seventies". But I hope my belief proves misplaced. Watching Mr. Savile mug for the camera inspires the appropriate amount of creepy disgust.

I'm a huge fan of rock and pop, and it's interesting to see these pre-1967 artists.
So many scored zero to one hits. I lack much nostalgia for this era of
hegemonic control of music output by the recording industry. But 1964 music (music on the charts when I was five years old) interests me. Also, the lip sync is a fascinating thing. It's hard to imagine, watching this 1964 film, that Woodstock was just 5 years away.Eric Burdon's voice had a gravel in it even then, though.
Collapse