I decided to give Codeacademy.com a try. I wanted to sign up for some on-line courses in programming. First, though, I wanted to do some self-paced primer stuff. I just spent a few minutes on the first few Python lessons at Codeacademy. It was the sort of thing I know already, so far--setting a variable and the like. But it will be fun to see how far I can go with it. The simple interface is a big plus. I feel a bit illiterate with computers, so perhaps I can be more of a beginner reader.

My new driver's permanent driver's license arrived.The license came in good time. It was only a couple of weeks ago that I went to the Garland mega-center to replace a lost license. The new picture is less than ideal. It is probably a good reflection of how I look at 8 a.m. after driving across the city. It's not the "wild street preacher" look of one past license, nor is it the "salesman relaxing" look of the immediate past license. It's more a pre-smile jaw-lift look. The fellow should wait a second to snap after saying "smile".

On balance, I wish my driver's license picture could look like this: 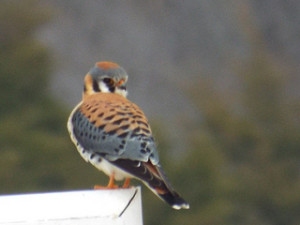 Tonight the speaker at the Garland Bar Association talked about receiverships. I do a lot of representation of debtors and creditors, so this talk was interesting to me. I like the Sherlock Holmes element of finding assets held by people who pretend not to have assets. I would tell you my war stories, but war stories are best kept as secrets.

Before the meeting, I stopped by Elgin B. Robertson Park, next to Lake Ray Hubbard. I was delighted to see dozens of migrating white pelicans. I took lots of pictures of red-winged blackbirds.

After my meeting, I listened to Radio NZ on the way home. The radio folks had a panel discussion of how rising utility prices would hit the poor and elderly particularly hard in the coming Winter. I noticed that this result followed yet another flawed de-regulation of electricity. I had hoped that New Zealanders would not fall for the notion of de-regulating essential utilities, but, sadly, they had so fallen. I did like that the panelists forthrightly recognized that the solution involves helping people who cannot fully fend for themselves. A smarter utility structure would have minimized the need to do that. It's funny how some de-regulation, like phone service, works fine, and other forms, like electricity, work far less well. I believe, by the way, that very high speed internet access should be provided by public utilities.

One of my favorite past assistants connected up with me via Linked-in and then Facebook.
I like the way that social media can help one re-connect with folks. I also got to have calls with my brother and my sister today, which is a good thing. I worked hard today,too,and now it will soon be Friday.
Collapse