After work, I went to Murphy City Park. I saw a pair of American kestrels. Here is the male: 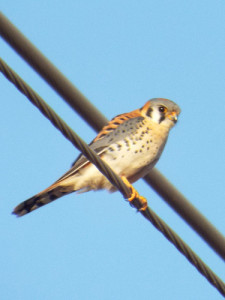 Then I saw a lot of eastern bluebirds. Here is one that saw me, too: 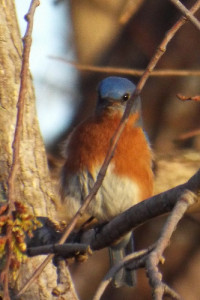 A young woman jogged around the park. She always courteously gave me a berth when I was standing on the sidewalk snapping photos. I tried to make up for that by stepping off the sidewalk as she approached, to let her pass. She smiled, and said "sorry", but I assured her the fault was not hers.

I arrived at early-voting at 6:30 p.m., well before poll-closing at 7 p.m. I am a Democrat in a Republican county, so I rarely have to wait long. To my surprise, not many Republicans were in line, either. I was a bit surprised, because a few of the races have been heated on the Republican side, with strident radio commercials. Each candidate wants to point out how that candidate wants to fence out undocumented immigrants, reject marriage equality, and oppose protecting the environment. It all gets a little old after a while. I want a more just nation.

It only took 4 minutes to vote. The Democratic primary had only a few contested races. I had done my research, and knew for whom to vote. I was pleased to vote for Wendy Davis for Governor.

My wife and I went to Wasabi for sushi. I had eel roll, garden roll, tuna roll, and yellowtail roll. My wife had one of the house specialties, fitting called an Alamo roll.

In other news, a gentle instrumental I created called "Ten Kisses Goodbye" came out today
on the Classwar Karaoke netlabel edition 0025. It's one more of my musical compositions now on the Free Music Archive: