Sunday morning I had it all arranged gracefully. I would attend a Weight Watchers meeting at 9:30 a.m., then a church service at Community Unitarian Universalist at 10:30, and then head to the airport for my 1:50 p.m. flight. My phone app showed the flight was on time, and a spot of Winter weather was to move in during the late afternoon.

As I pulled into the parking lot for my first stop, the radio said that 200 flights had just been cancelled at DFW Airport. The storm was a bit "early". I went in, weighed in (down .4 pounds) and then got on the internet from my cell phone.My 1:50 p.m. flight had been cancelled.

I dialed up the airline, hopped in my car while I held, and drove/flew to the airport. As I arrived there, thirty five minutes later, the phone attendant took me off hold. She got me onto the 10:50 a.m. flight. I just made that flight,thanks to a kind person at the check-in desk at American Airlines. I sat near by a nice woman from Orlando who told me she dreamed of taking a horse ride in the San Francisco Bay area. Then a nice flight attendant found me an aisle seat. We landed at 1 p.m. Pacific. I rented my car, and headed to Alviso Marina County Park.

elainegrey recommended Alviso Marina for bird-watching. She was right. I walked on the Alviso Slough Trail, which ran by salt ponds in one direction and wetlands grasses in the other. During my walk I saw hovering northern harrier hawks, house finches, lots of sparrows, hundreds and possibly thousands of northern shoveler ducks, a plover-like creature unknown to me, a local grebe, a black phoebe, and a bit of mud. I had a great time. I wish I had gotten pictures of all that I saw. I did not see the American avocet the site is known for having.But I was well-pleased. The weather was chilly with a light rain. A somewhat chatty man with a bicycle told me about his industrial injury, the loss of a friends and he also pointed out the hills of Fremont and Mountain View. 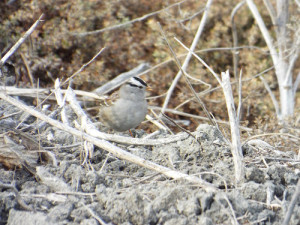 I drove to my hotel in downtown San Jose. In the lobby bar of my hotel, a throng of people were gathered to watch an arcane program called the Super Bowl. I went up to my room, turned it on, saw a pick-6 touchdown score, and decided I had reached quota. I ate a foot-long sandwich at Subway Sandwiches. I then returned to my hotel and turned on the Puppy Bowl for a few moments. I found the Puppy Bowl a better sporting contest but even its charms could not compare to walking on the edge of a wet slough on a chilly day..

I could not find Downton Abbey on the educational channel,but I fell asleep soon in any event. I rose early today, worked a very full day, and caught an evening flight to Los Angeles. I type this now as I wait for a midnight flight to Dallas, ready to be home again.
Collapse