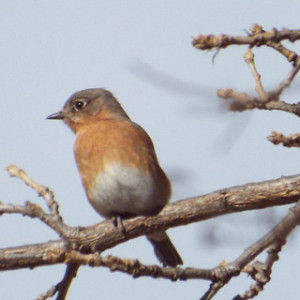 "His soft warble melts the ear, as the snow is melting in the valleys around." --Henry David Thoreau

When I was a boy, eastern bluebirds were rarely in evidence where I lived. They are cavity nesters and they lost habitat to modernity. They also lost nesting space to the invasive house sparrow. A dedicated set of hobbyists, encouraged by scientists, launched a campaign to save the bluebirds. From the 1960s to 1980s, their work spread. These hobbyists put up nesting boxes too small for starlings, but just right for bluebirds. The eastern bluebird recovered, and now it's listed as being of "least concern" among the species list.

I get to see bluebirds most weeks of the year. They live year-round where I live. We get the eastern bluebird, while a few hundred miles west the western bluebird and the mountain bluebird ranges begin.

Today proved to be a very sunny day. I walked in Murphy City Park and saw two bluebirds. A bluebird often will stay in one place long enough to permit photographs. Bluebirds are little thrushes, who have less fear of me than, say, a yellow-rumped warbler. I suppose if my rump were a bright, incendiary yellow, I might keep moving, too.

It becomes tempting to take eastern bluebirds for granted, and perhaps it is human nature to discount the familiar. But this ignores the heroic comeback by this species which suffered huge habitat erosion.

I take two lessons from all this: