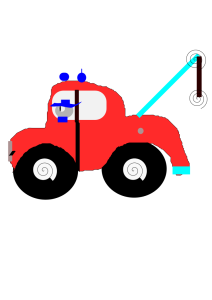 I drew this little tow truck man with the program Inkscape last night. I like tow trucks. When my car runs out of gas because I tried to wait until the next station, they come and bring me gasoline. They have all sort of great examples of pulley use. Lots of the parts involve hydraulic engine work of one kind or another. Also, the tow truck fellow usually calls you on your cell, says "where are you? I looked for you on Highway X, but I did not see you",and what other stranger does that for you?

I liked the notion behind the book about how one learned all the most important things in kindergarten. I think sometimes about things I wish I had learned better in the early school grades, like drawing. I was thinking a few moments ago on this theme. I remember far too much emphasis being placed on pasting neatly. I am sure paste-alignment is a useful life skill, but pasting neatly has never been a big priority for me. I never use Elmer Glue anymore, and I never understood why Elsie did not have her own brand of glue, given that Elmer and Elsie both appeared on milk cartons. But I wish I had learned to draw.I know some of that skill is innate and not learned. But I would settle for a bit of learning, and a little ability to draw.
Collapse