I saw on Facebook that a friend I met through the internet (and once in person) just had her baby. Her husband posted a picture of her with her son in her lap. She was smiling--not a pose-for-pictures smile, but a real I-am-happy smile. I like seeing people live those moments of life which are so basic, human, proud and yet not so self-conscious.

Today is Election Day. We have several state constitutional amendments on the ballot. One is to abolish two agencies required by the state constitution but abandoned by the legislature. I suppose that is a form of typographic correction. One is to allow a manufacturer of large items keep spare parts in its inventory for a longer period without being taxed. I see the point as a jobs-friendly measure but passing individual tax exemptions via constitutional amendment strikes me as less than ideal tax policy. I'll have to decide what I think about it. One creates a water agency, which makes sense to me. I see water management as one of the great ecological issues of our era. Two exempt disabled veterans and surviving spouses from some property taxes, which I am surprised is not already the law. Another removes the provisions of an unused hospital authority law from a single border county. So it's an easy election, likely to have low turnout. I'll go on my way to work and vote.

Last night we watched on CNN as one more armed, troubled young man entered one more public place. This man apparently killed himself rather than going on a spree. Soon the press will be alight with coverage. Soon the more conservative Facebook friends will post about how guns cannot be pried from their hands, hands, which, judging by other facebook posts, are usually occupied with things like delicious meals and holding grandchildren. My more liberal Facebook friends will post political cartoons about gun-toting yahoos. The cable news channels will pay talking heads to pontificate to us all. Nobody in society will take any action to figure out how mental health services could better reach people suffering from mental illness.

I arrived at my polling place at 8:11 a.m. I was the only voter present. I had wondered if the new, ill-advised voter ID law would delay me. The processing was quick, but my ID matched my registration. Had there been a hundred voters and some ID mismatches, the situation might have been different. So my isolated case is of limited virtue as an example. But I was glad to vote and be back on my way in four minutes.

I also picked up my shirts from the dry cleaners, averting fashion disaster. I even stopped by Oak Point Park and Breckinridge Park on my way to work, to see what I could see from my car.

At Oak Point Park, I saw a kestrel. At Breckinridge Park, I saw four kestrels, a number of eastern bluebirds and the first yellow-rumped warbler I have seen this year. I like the way a rainy day makes the colors pop. 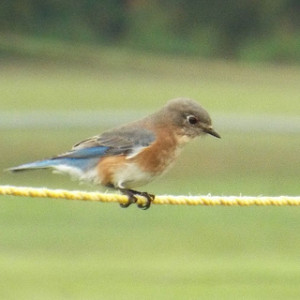 Heavy rain fell today. It was Heaven. I had a good, suitably busy workday. When I have a telephonic hearing on a rainy day, I always worry that the connection will not work right. But things worked out fine today.

When I first arrived home, I threw B's blue bear toy which she delightedly chased.
Collapse