I drove this morning to Hagerman National Wildlife Refuge. On the way, I stopped at a McDonald's for oatmeal. The restaurant was filled with athletes from a small college in Oklahoma. I was disinclined to wait in line, so I went to another outlet up the road.

I liked the eastern comma butterfly. 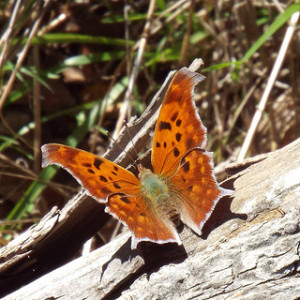 On the way back, I listened to the Linux Action Show on the TuneIn Radio app on my cell phone.The show included a review of the Cinnamon desktop. It sounded pretty good, though I like the simple-to-the-point-of-primitive LXDE desktop. LXDE is basically a start button and lots of open territory, which is just right.