I sold a calculator I never used on eBay. The auction price was low but fine, and I got it shipped off the same day that it sold. The fellow at the Wylie post office was super helpful.
I want to sell off lots of excess similar things, to de-clutter a bit. If I collect enough, I'll spring for a Zareason computer.

I ran the program FedUp last night to upgrade from Fedora Linux 18 to Fedora Linux 19. This turned out to involve runnning one command from the command line, waiting, hitting reboot, and waiting some more. I fell asleep waiting, but when I woke up, the upgrade was flawlessly complete. Even the photo I use as my screenshot (a stylish kestrel) was in place. I had to run a command line utility to confirm that the upgrade had happened. I had worried that the upgrade would be like Windows upgrades and service packs, which sometimes "broke" things.
But Fedora, despite its reputation for being "bleeding edge" rather than "stable", never
breaks my system. I run "update programs" every week or so, and it is always updating and improving the software, but smoothly.

I have been impressed, too, with Fedora's new badges program. Badges are little pixel prizes one gets for things ranging from signing up on the user's agreement to making major contributions to the distribution. They are all cute little images drawn by the Fedora interaction designer done in Inkscape of little pandas and badgers (appropriate for badges) and the like. It turns out to be fun to get badges, and it's a good way to discover ways to get involved in Fedora. I am amused that these silly things are fun, but fun they are to get. Better than collecting pokemon, but not as good a getting an Ernie Banks baseball card. I am only up to five badges.

I went for a walk in Breckinridge Park after work. This park often has a huge number of eastern bluebirds, perhaps because its trees have lots of nest-ready cavities. Last night I also saw lots of house finches. Their song is always vibrant. I thought they are year-round, but I wonder if some migrate in for the Winter.

Cloudy weather returned to our drought-stricken land. I walked in Breckinridge Park at noon. I saw a pair of kestrels who flew from place to place. I saw two mourning doves.
A scissor-tailed flycatcher perched on a sign. 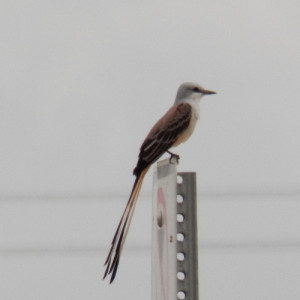 I gave legal advice at the Salvation Army tonight. I think that people can show great courage if given a chance. The rain finally began tonight, like manna from Heaven.
Collapse