Last night we watched on television as West,Texas burned after a fertilizer factory explosion.
West is about 80 miles from here. I stop there for kolaches when I am heading down I-35. The toll of the disaster is not yet clear, but it is clear it is a terrible disaster. I was grateful that one of the local stations stopped broadcasting reruns to cover the tragedy, even if the repetitious nature of the coverage, as usual, became tiring.

A storm and cold front moved in while we slept. We woke up early to high winds and a rainstorm.
I got up and reviewed the sparse news about West. Then I updated my Linux computer. Fedora uses frequent updates, but fortunately they do not take too long. Unlike Windows updates, I
do not worry that the updates will run the risk of breaking something.

I watched an episode of "McHale's Navy" on hulu.com. I read the wikpedia entry for Joe Flynn,who played Captain Binghamton. I learned that he died young, at age 49. I would not have guessed that.This show went off the air while I was very young,but I used to watch it in reruns when I was a kid. I like that situation comedies last half an hour.

Events move so quickly. Today the West, Texas story continues to develop and break my heart.
The Kaufman murders resulted in indictments--the police theory is that the killings were revenge-based by a disbarred disgraced justice of the peace irate over a criminal prosecution.
An arrest warrant recites that one of the two alleged killers confessed, and the press suggests that the car and weapons involved were found via a search warrant. As I type this, the news reports a new death of a policeman at M.I.T. The photos of the Boston bombing suspects are circulating on television. I spent my evening at the Garland Salvation Army giving folks free legal advice on their civil legal issues. There were lots of clients and six attorney volunteers.

The day proved cold today and rainy. During lunch I drove through Breckinridge Park. I saw my first eastern kingbird of the Spring. I went to take his picture. Just before I snapped the shutter on the digital camera, a scissor-tailed flycatcher flew in front of him. I like the juxtaposition. 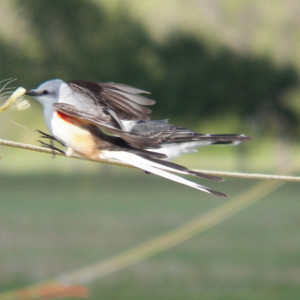