Yesterday morning I walked for 90 minutes at Oak Point Park and Nature Reserve in Plano. . I  saw Carolina chickadees, tufted titmouse, red-bellied woodpecker, yellow-rumped warbler, dark-eyed junco, chipping sparrow, mockingbird, and northern cardinal. Prior to my walk, I stopped by a Chinese bakery just off Spring Creek Parkway and dined on red bean rolls and a croissant. After my walk, I stopped by Bethany Lakes Park and took pictures of ducks.

My wife and I went for lunch at Market Street. I spent an  hour on Saturday afternoon cleaning out my prior car, which I am just about to sell.
I got 169,000 miles out of my Hyundai, but my new car is over a year old. A kind neighbor wishes to buy my old car, so I will sell.

In the late afternoon, I  took Beatrice for a walk. Though the day started out a few degrees above freezing, it ended on a warm note, with temperatures in the mid-60s F. (around 18 C.).  I saw two cedar waxwings atop a bare tree by the swingset in the portion of Glendover Park by the swimming pool. One of the pictures came out great.

Saturday night we went to the movie "The Impossible", which we enjoyed very much. It avoided many of the disaster movie cliches', and even its flaws [excessive focus on westerners in a crisis in Thailand] were obscured by its big heart. It was the kind of movie that helps one appreciate what a gift one has when one is alive and healthy. That so much of the story was true was fascinating.

After the movie, we went to a Furr's Family Buffet, which was very lackluster. The food was reasonably good,  but the ambience  of the eating area was very scattered, as if the crew was three steps clearing up after the clientele. The food preparation involved too much butter.
We enjoyed our meals reasonably well but we will be unlikely to go back on a Saturday night. 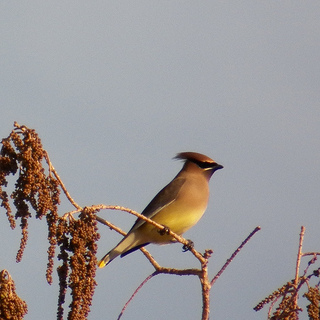