I don't know how old she was when she died. I came to know her before I began to keep a weblog over a decade ago. The time before I had a weblog is like pre-history. I believe she must have been over eighteen, which means that I was in my 30s when she was born. I did not grow up with her, nor did I ever live in the same house in which she lived. In that sense, I cannot say I knew her well. She was my father's cat. But she and I were friends. Her name was Kitty Kitty.

She did not have a firm grasp upon some of the human social graces. If a person petted her the wrong way, she administered a corrective bite, the kind of gummy bites cats give, some teeth, but just enough gums to give you the benefit of the doubt. But she was a deeply loving cat, in the way that some people who nip a bit can be. Her purr could change rivers in their courses. Her stare was like Medusa's in reverse--it turned one from stone to human.

She became an outdoor cat late in life, after being an indoor/outdoor cat.I have never seen a cat adjust to being an outdoor cat so well. She managed to find things to keep her interested in life. Late in her life, she liked to come into the house, only to leave as soon as she felt it in her interest to do so. 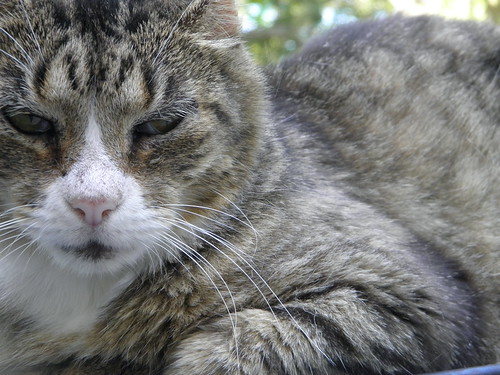 I saw her a few months ago. She had just gone on wet food, as she no longer had enough teeth to eat dry food. She was undaunted by anything, and we got along famously.

It's funny how you can be fond of someone you've only seen here and there periodically for years, but I never find my fondness limited by the rationing of time.

Will Rogers said something like that he wants to figure out where dogs go when they die, because he wanted to go there, also. I feel the same way about Kitty Kitty, even if in that better place she might nip a time or two.
Collapse