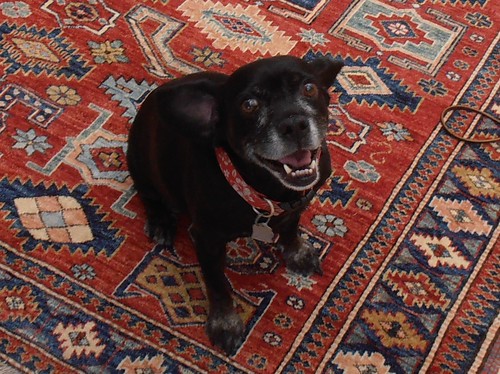 Beatrice sitting on a rug, originally uploaded by gurdonark.

Lately I notice how much a second look can give an unexpected benefit. Today a field of starlings turned into a field of brown-headed cowbirds--perhaps not a sweeping change, but a change I saw only through a closer second look. My accomplice in revelation on this morning walk is pictured above.

After work, I drove to Lake Lavon, to a place called East Fork Park. I liked the part in which I saw a small pond (or one of the many Trinity River tributaries) into whose parking lot I pulled. I had the place to myself, and watched a scissortail flycatcher swoop down and catch bugs from atop the water. I also saw a cardinal and chickadees.

I noticed that a memorial existed in the park, with crosses and toys and memorials, rather like a roadside memorial to a victim of a car crash. The memorial said Gerren Isgrigg. I made a mental note to look up who he was when I got home. Tonight I found he was the six year old boy with severe challenges who was abandoned at a park [as it happened, the part of the park I visited] by an overwhelmed grandmother (who later pled guilty to a crime as a result, after the boy was found, no longer alive). I read a quote by a woman named Kathy Hanson who said "I came back to put a bear out for him cause he's like Wylie's little angel". I thought about the kindness of strangers, but also how we should build more shrines to the living.
Collapse