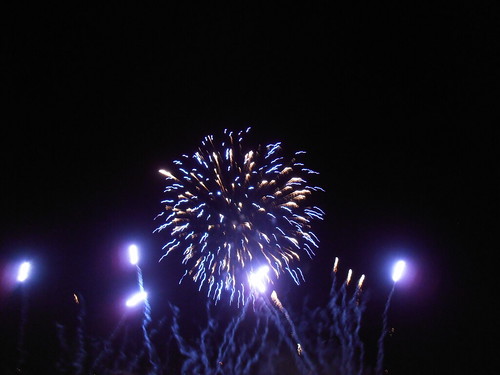 Last night our little town of Allen held its Independence Day festivities, Allen Festival USA. We drove to the local high school and parked our car. Then a school bus took us to Celebration Park. School buses nowadays have even less legroom than in my time.

We spread out our blue horse blanket on the grass, and listened to a rhythm and blues cover band do a credible job of slogging through songs from the '70s through the '10s. I walked a good way over to the food booths to get us some dinner. The crepe stand was operated by four folks who spoke only in sign language. The cupcake stand was in an old Airstream trailer. The extremely long corndogs and the turkey legs looked great, but I went with a BBQ beef sandwich and a banana.

The "real" band playing last night was the Bangles. They gave a really great show--instrumentally and vocally very solid, with great song selection. Michael Steele is not part of the group anymore, but the three "original" members and some additional background players did a very good job. The audience was a bit frustrating, as most of them were milling about and chatting, but this goes with open-air free community festivals. My wife went to get a tad closer to the stage near the end, and reported that the crowd up front was more in the hard-core "fan" group. I liked the interposition of "Magic Bus" in the middle of the obligatory "Walk Like an Egyptian" encore. I liked the way that the entire audience became animated during "Walk Like an Egyptian", a pop culture icon song if ever one there was. I liked watching the little two year old girl in the skirt with the huge polka dots dance to lots of the songs. I also liked hearing "Going Down to Liverpool" live, and the shout-out to Alex Chilton. It's still unfair that one of the most democratic bands in terms of song-writing and vocal duties got labeled as a vehicle for one band member, just because she happened to sing some of the singles and possessed an elfin allure, but it was good to see them back together now.

Then they had the fireworks show, which was really breathtakingly good. Because the line for the buses was so long, my wife and I elected to walk to her car.

I did some work today. I also rode to Green Park, near by home, on my bicycle. A storm was moving in as I walked in the small park. A mockingbird sang atop a tree. I'm daydreaming about vacations as yet unplanned.
Collapse