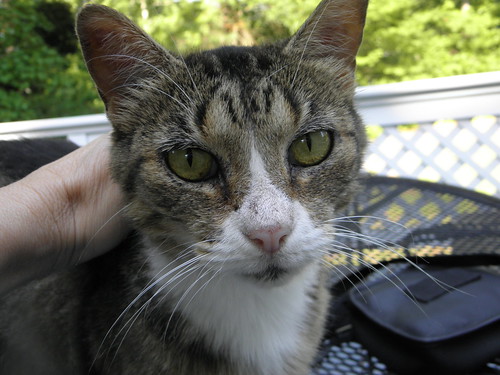 This is my father's cat, Kitty Kitty. I am very fond of this cat. I took this photograph, which intrigues me, as it reminds me a lot of a photo of a human someone posted on Twitter. I think it would be impolite,though, to show someone this picture and say "hey, the facial expression in your photo looks just like my father's elderly cat".

Sadly, "my" Firehouse Subs had closed its doors, never to re-open. Even the restaurant fixtures were gone, and all that was left was empty space and lettering on the windows. I was surprised, because it always did a good lunch business. I do not think the lack of my order of medium roast beef on wheat, combo, lettuce and cheese only, made the difference.

I tend to find places I like to eat, go there regularly and often order the same thing. A Boston Market near my old office has folks who know my "regular turkey, no gravy" order the moment they see me walk in. I still go there sometimes, because they know who I am. I have never wanted an exclusive membership in a private club or to be backstage at a concert, but I like to be known at Boston Market.

So I feel a little sadness at the loss of this Firehouse Subs. I ate Chinese instead, and it was good.
I went to the review site Yelp! and gave it a positive review, even though it has closed. It was the closest thing to a eulogy I could think to do.

The mail brought inexpensive tech gadgets I bought on line. I am eager to try them out.
Collapse