I spent today quietly. My wife departed quite early for a seminar. Though I awoke early, as ever, I did not leave the house until after 10 a.m. I went for a walk at Bethany Lakes Park, here in Allen. The lakes looked a bit like Autumn: 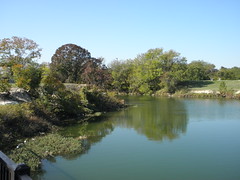 I really liked the belted kingfisher which flew from tree to tree, vocalizing its every concern about each and sundry thing. I also like the shoveler ducks and the cormorants which swam in formations, looking like characters from Gilbert & Sullivan.

This young great egret was by one of the small ponds which make up the "lakes": 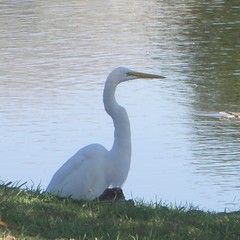 I took Beatrice for a brisk walk around Glendover Pond. I loved seeing the mockingbird sitting atop our across-the-street neighbors' live oak tree. He looked like the master of all he surveyed. Later, I walked Ted. Ted will be 17 next month, and her walks are now quite slow and do not cover much ground, but she likes them very well nonetheless.

I watched football games on television, including watching the Arkansas Razorbacks squeak by Vanderbilt.

We dined tonight at Rockfish Grill. I liked my simply-grilled catfish with boiled potatoes and steamed vegetables. Then we stopped by Yogolicious, near the movie theater, for a DIY frozen yogurt. I chose pumpkin and a thing that tasted like creme brulee. I like the charming teen that works there--she strikes one as the sort who might one day be a star saleswoman or some other charismatic success.
Collapse