Heavy rain falls as I type this at 10.25 p.m. I welcome the rain, particularly as I drove over the Lake Lavon bridges today, and saw the dry lake bed stretch for miles. The cloud cover all day finally dissolved into a little relief from our moderate drought.

I woke early this morning, and then lay down for a moment, resulting in my over-sleeping. My young friend and I drove up to the Sherman/Denison area one county north, in Grayson County. We stopped by Loy Lake Park, where a tiny county fair was in session.
We watched a bit of one of those pet shows in which pets of disparate species are judged on curious categories. My favorite part was for the best costume. Some canine contestants had faux stuffed animal riders. One horse had a pink mane. In an earlier round, I suspected that the goldfish would top the two mixed breed dogs for "smallest". We also saw rabbits and cows, as today was rabbit and cow judging.

Among the few booths at this fair, I liked best the booth for Devon's service animal. Devon's mom ran the booth. She explained that Devon has epilepsy and she is fund-raising to get him a service animal. We voted in favor of this plan by buying 3 cookies for a mere dollar to do our miniscule part. I had a bit of one cookie--it was a quite tasty cinnamon/sugar.

We walked the Loy Lake Trail, which was quite lovely. A wooded area surrounds the trail, which circumnavigates a small lake. 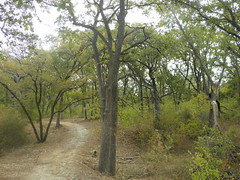 We saw a molted snake-skin hanging from a tree. I think that human agency was involved in its ascent. We stopped at the coffee shop at Sherman's Hastings bookstore to buy a drink and surf the internet via free wi-fi. I particularly enjoyed my hot blackberry tea as I tried, without success thus far, to sort out why my friend's little RCA Pearl mp3 player no longer displays the artist and song. We dined at Zen Fusion in Allen, where my broccoli chicken was very tasty.

Tonight I watched the Arkansas Razorbacks defeat Auburn University in a televised game, and thought about the virtues of low-fidelity.
Collapse