Today I spent the day quietly. I watched the local sports contest on television. I read the newspaper. I downloaded some netlabel music and listened to some classical music on mog dot com.

My fondue dinner on Friday night featured a cheese course and a chocolate course. My trip to Arkansas featured a cheesecake course.
I felt some trepidation about my weekly Weight Watchers weigh-in. Prior to my Arkansas trip, I went on a four day business trip. Prior to this week's meeting, I experienced a mild plateau, at 28 pounds lost. I thought that all my various indulgences would result in a weght gain of four pounds. The one pound I actually gained in the last two weeks felt like a relief. For some reason, the Autumn season, despite its holidays, is an easy time for me to lose weight. We'll see if I can achieve additional progress on my eating plan by year's end.

In the late afternoon, I went for a bicycle ride. I rode down to Glendover Park. Then I crossed Exchange Parkway, and rode on Cross Plains Drive. I turned left at Comanche Drive and rolled into small Green Park. As I had only consumed ten minutes or so by this time, I turned sought onto further suburban streets whose names elude me. I remember one was Cool Springs Drive, because I stopped and took this picture, in order to later save 1,000 words: 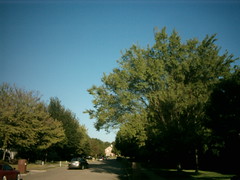 I've been using the internet and the on-demand feature of my cable television to watch television episodes I did not see when they aired. I watched the first Ashton Kutcher episode of "Two and a Half Men", and believe that show will keep on running. I saw
the first episode of "Whitney", and thought that despite its lead character's charms, it may be too thin to last. I saw the first episode of
"Two Broke Girls", and thought that it's a very old-fashioned sitcom in its way, but that Kat Dennings may be able to carry it off.

During my bicycle ride I saw a migrating monarch butterfly, serenely and slowly floating from one place to another.
Collapse