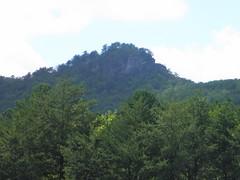 King's Pinnacle, in the southwestern part of North Carolina, fails to truly tower. It rises 1700 feet above sea level, and does not rise so very high above the surrounding countryside. I could have walked on the Pinnacle Trail last Friday and walked up to the Pinnacle. Instead, I walked the Turnback Trail, a trail from which it was easy to turn back. I had only a limited amount of time, you see, and turning back rather than reaching the pinnacle was my immediate goal. The pinnacle is a few peaks away from the site of a famous revolutionary war battle.

Now that I am back in droughtious Texas, I miss the rains of Kentucky, Ohio and North Carolina. Still, it's good to be home again. Sometimes I wonder why anyone wanders, when one could explore one's own area for a lifetime.
When I was in Arkansas, I read some of Thomas Jefferson's letters. In one, he advised a student to refrain from foreign travel and to get to know one's own country. I don't know about all that. But there's a kernel of truth there, which I'll pop like popcorn, somehow.
Collapse