I drove this morning to Trinity Trail, about 20 minutes from my home. Neaby Brockdale Park was closed because Lake Lavon's drought conditions mean that boats cannot launch.

The trail was less flowery than usual, but cowslips and lovely, spiky eryngium thrived. Here's the landscape view of the beginning of my walk: 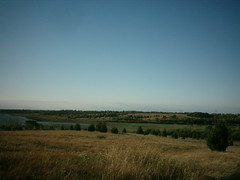 Flocks of doves flew everywhere. Dove hunting season just began, and off in the distance I heard shots taken at doves. At one point, I heard the hunters' voices. I thought they missed with virtually every shot, but as I returned from my hike, I ran across a freshly-killed dove on the trail. I doubt the hunters, well away from the site, saw this dove fall.

Aside from doves and a turkey vulture, I saw cardinals,a crow, and a Carolina chickadee, so this would not be considered an exotic birding expedition. Still, the weather was in the 70s, as a cold front rolled in. I enjoyed the hike.

As I left the park, I saw a crow in hot pursuit of a sparrow. Later, in my neighborhood, we saw another crow in pursuit of another sparrow. The former sighting looked as if the sparrow had evaded the risk by a nose, while the latter pursuit appeared more dangerous for the sparrow. The heat and drought seems to have reduced the bug count (save for some dragonflies), so I suspect that the crows feel the need for avian forage.

The heat and drought, though now departed, caused the scissortail flycatcher and western kingbirds to disappear early. Perhaps they are already headed south. They usually stay until October or November.
I expect for the next several weeks we will see them again--but in migration from Oklahoma.

I meant to bicycle or perhaps even car shop or both this afternoon, but I found myself napping. It's good to get some rest. Tonight we re-watched a Harry Potter movie, as we are trying to catch up with the ones we've already seen before watching the ones we have not seen.

I am writing a new song in Anvil Studio, for which I will use other software to sequence with synths. Anvil Studio is a fine program, but its piano roll appears limited to two octaves, unless I am missing a format setting. Tunafish, on the other hand, has a multi-octave piano roll, but its way of shaping notes of cumbersome. I may have to re-acquaint myself with Musedit, as it was a flexible program for piano roll. I'll bet, if I look, I can find a simple freeware midi piano roll editor that's easier than all of the above.

I enjoyed my Labor Day, though I accomplished less than I meant to do. I'm ready for work to resume tomorrow.
Collapse