A massive storm arrived a bit before 3 a.m. The rain fell in heavy droplets. The wind blew in huge sheets. We turned on the television to assess whether tornados were possible. At 6:45 a.m., as I write this, the sky is a lovely shade of storm: 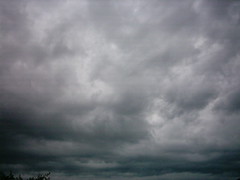 We need the rain so badly. I hope this will help mark the beginning of the end of this year's drought, which has caused much harm in west Texas (though we here in the Dallas area have had it easier).

My driver's license went missing on Friday. Although it will eventually turn up, I decided to go get a replacement on Monday. I arrived at the Plano DMV at 7:50 a.m., because the office opened at 7:30 a.m. [and I was later than I intended to be in arriving]. The line started at the door and ran across the corner of the building, some 100-plus people long. Soon I was waiting in a system in which every 20 minutes, about 30 people were allowed in. Though the morning was a bit warm (if cloudy), the people in line were patient. I finally made it into the building at 9 something, and got served by 10 something. Contrary to my expectation, the license required a new photo. My photo looked like the photo of someone who had received an electrical shock from a low-voltage experimental device, or like that of someone who discovers that he is a recent heir of a very valuable baseball card collection.

My wife and I each left work an hour early to do some business at Fidelity Investments. The very helpful professional there described meeting her husband in left-center field at a softball game. She had a great honeymoon picture on a Cancun beach, being held aloft in her new husband's arms. She had lost a first husband to death far too soon, and she wisely said she had wanted to be married in Mexico so that her second wedding would not just be a rerun or reminder of her first--each would be a different thing.

last night we watched Antiques Roadshow, broadcasting from Wichita, Kansas. I fell asleep last night quite early, and am better for the rest.
Collapse