Daylight Savings Time comes once a year. Accordingly, one would imagine that, post-time-change, 7 a.m. would not seem so dark and early. This morning I arose at 4 a.m., after a dream in which I was married to someone else who had instructions from a malevolent higher being to cause me bodily harm. It was all a bit like an episode of the Twilight Zone merged with a comic book merged with a 50s sitcom.

I read about the small town of Albany, Texas, which I wish to visit soon. Its art museum in an old jailhouse sounds fascinating. I'm also gearing up for Saturday's Dallas Auto Show. My car is nearly at 155,000 miles.
Soon I hope to get a new car, and this particular auto show will provide valuable intel about cars with high gas mileage and a fun sound system. The paper says that Gen Y kids want their cars to be wired up and interconnected, and that they eschew traditional driving pleasures.

We ate good sushi last night at Allen's new Chinese buffet place, Grand Asia Palace. As I read this morning about this place to stay or that on the road, I recalled a woman at a place we stayed saying "It's so nice to meet fellow bed and breakfast people!". I must admit that I am not "bed and breakfast people". I'd rather have raisin bran at the Holiday Inn Express than eggs benedict with goat chorizo at the bed and breakfast. But it's good to be able to converse with people, no matter their choice in accommodated meals.

Ah, for a hook, a line, a rod, a reel, some worms, and a stray afternoon on the Blue River in Oklahoma. 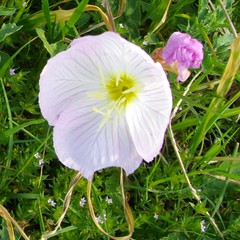 After work but before the Garland Bar Association meeting, I went for a walk in Garland's Spring Creek Forest Preserve. The bikers were out in force, so I stayed with the more "hike" parts of the hike/bike paths. I saw a cute chickadee fly from tree to tree. I saw little stands of showy evening primrose, one of my favorite native Spring flowers. I passed a man and a woman who had been fishing in Spring Creek. They had a huge stringer of drum fish. They looked sheepish, as if they expected me to be about to impose a Game and Fish fine. But I have no idea of the rules applicable to drum fish, nor any authority to do anything about them. I took pictures of primrose. I saw ducks fly overhead.

I had a charming talk with a man from the Copyright Office by phone. I like federal workers, and want them not to have to endure the threatened government shut-down. I bought a detective novel by a woman from southern Norway. The wind blew today, but the temperatures were warm. I heard a fascinating talk about medical malpractice statutes. I managed to eat a reasonably healthy dinner. I like the idea of "lift up His Countenance" and the idea of all those billion of non-reproducing ants, doing anything possible to help non-linear relatives survive and multiply.
Collapse