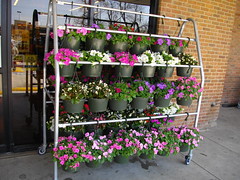 Flowers outside the Tom Thumb grocery
Cheese pizza
A full moon, very close to Earth
Imagining prairie dogs near Abilene
Good conversation with great friends over frozen yogurt
Catching bugs that got into the house, causing Beatrice consternation, and releasing them into the back yard.
A well-fought on-line chess game ends in a draw
Law and Order: UK
A girl playing guitar, her guitar case open for dollar bills in the yogurt shop

In the morning I rested, worked a bit, watched part of a movie on television, listened to the new song by Swaying Smoke, and read my Julie Czerneda novel. I also got some much-needed rest in.

In the mid-afternoon, I went to Bar B Cutie's for a pulled pork sandwich with Brunswick stew. Then I drove to the Heard Natural Science Center. The temperature was in the high 70s. I saw a lot of butterflies, including my first swallowtails of the season. The great egrets and great blue herons were in their rookery in a huge tree by a wetlands zone. I got good pictures of a male cardinal. On the Hoot Owl trail I saw a lovely rough green snake, which stopped to let me look at him. I also saw chickadee, bluebirds, and some cedar waxwings, as well as those yellow flowers that look like daisies but may be groundsel.

I came home and resumed watching my movie. When my wife arrived home, we went to Jack's Pub in McKinney. My wife knows the chef at this new eatery. The menu is fascinating--all the entrees and prices are pub food prices, but everything is done with a real flair. I had sweet potato fries and something advertised as a hot dog that actually was real sauerkraut and various other tasty non-portables and a sausage on lovely artisan buns. The TV showed basketball games, though inexplicably the channel was not on the game in which Butler upset No. 1 seed Pitt in the closing seconds. The sound system played Grateful Dead songs until it switched to Lynyrd Skynrd. If I ever gave an ambient music concert, if someone said "play Free Bird!", I completely would, assuming I can remember how to peck out the melody. When "Sweet Home Alabama" came on, my wife said "I like this song", and our waitress said "Yeah! I do, too!".

I came home, and did a bit of work. I also got out my binoculars and spotting scope, because tonight the moon's elliptical orbit brings it close to Earth, and the views are grand. Sadly, it's so bright my digi-scoped pictures are too bright for precision, but my memory-camera will suffice.
Collapse