Last night we ate at Chow, a place which advertises that it serves Asian street food. This Thai-oriented fusion place was very well done, with tasty food and a rich but simple menu. We went there after this year's "we serve comfort food but make the starch fancy so that you know we have a chef" place, called Whiskey Cake, was so full as to have an hour's wait. We'll try Whisky Cake in less crowded circumstances.

We topped off dinner with red mango yogurt, and then went to see "Gnomeo and Juliet", the little G rated animation which I found a good watch though it was down to earth and not particularly amusing. The animation had a simplicity I liked, though the 3-D effects were of the "added in" variety. I was pleased to see it was done in Toronto.

Today my wife, my brother and I drove down to the BBQ place Red, Hot and Blue at 75 and Walnut Hill in Dallas to have a noontime meal with my Uncle Ivan, Aunt Virginia, my cousin Morgan and his 15 year old son, Sam. Sam is in town to compete in the fencing Junior Olympics. I was glad to get a chance to visit with these relatives, whom we do not see often enough. 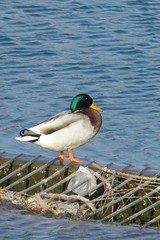 I started my day watching the birds in our back yard, a rather grackle and gull-ish pursuit. During the day, my wife and I took a walk around the Glendover Park pond, where the mallards were out in force. I also walked at Bethany Lakes Pond, where red slider turtles sunned themselves.

I am working on an ambient song with the working title "Potato", but I'll probably rename it something involving terms like "dawn" and "mountain king" and "thrall". Actually, I like one-word titles like "Yukon"--gold potatoes, that is.

We watched the Percy Jackson movie on HBO family and enjoyed it. I am in the early but interesting going of a Swedish police procedural. I'm ready for a good night's sleep.
Collapse