1. I never have to un-friend someone who never posts, because they never post anyway.

2. In eight-plus years of having a weblog, LiveJournal drama (i.e., situations rendered needlessly emotional
through the communicative imperfections of the weblog format) has only happened thrice or so. One time was with a user with whom I had discussed how we'd never have such drama--and was, predictably, over something as near to trivial as possible.

3. I participate in lots of social media, from twitter to facebook to a music community to flickr to a few websites. Yet I find my LiveJournal weblog has a familiarity that is kind of like home. I think that LiveJournal provides a scope for writing that others of the social media do not satisfy.

5. In the early days of LiveJournal, I'd run into lots of folks who posted very literary-leaning posts, with tons of links and images and allusions, and often with a kind of thematic slant which amounted to "this lj user is really very hip and deserves a book deal". I enjoyed a few of these journals, and found a few more a bit much. Somewhere along the line, though, this kind of LiveJournal stardom faded away, and the site became, overall, a bit better for the loss.

6. Some days LiveJournal seems like the 23rd hour of a 24 hour dance contest. But I say "strike up the band".

7. I still find LiveJournal one of the easiest self-publishing venues. 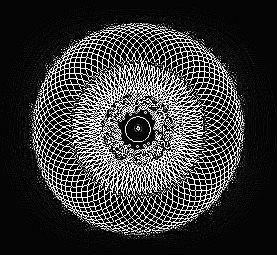 protozoan in a dark pool, originally uploaded by gurdonark.

I like to look at protozoans through a microscope lens. I like the thing in which one takes a broom straw, puts it in a disused jelly jar full of water, lets it sit, and then reviews the results under a microscope.

I remember the first time I saw a rotifer under a microscope. A rotifer looks like a cross between a Norelco rotary razor, a janitor's moustache, and Burl Ives. I've never been to a 3-D movie whose special effects are half as good as a rotifer's spinning action.

So many spectacles take place beyond our vision. You need a lens to see the little whip-like flagellations of euglena.A paramecium's cilia only really stand out when the lens is focused. A distant small bird turns out to be a fabulous painted bunting.

How many emotional rotifers do we miss? Also, when can I have some fresh-cooked roti again?