I put a microphone I no longer use on sale on eBay. The bidding is at about 24 dollars, with a few hours to go. I did not pay very much for this microphone, bought in one form of sale or other on-line, so 24, while less than I paid, seems like a good number so far. We'll see how much higher it goes.

For the second time in the decade plus I have been using eBay, a buyer failed to pay late last year. I'm now
auctioning the mixer she did not buy. The sale has several days to go, and the bidding is only at a dollar.
Last time, the item auctioned for 41 dollars, with several bidders, and then my bidder reneged without explanation. My guess is that she did not understand about shipping costs or paypal, but my guesses will have to remain as guesses.

On my computer table, a card says "Atoka's Only Amish Country Store, Pecan Shop and Chocolate Factory". That's branding I understand. The football game last night turned out to be exciting, before a last minute error ended my team's comeback. The world is full of next seasons.

I saw that Gerry Rafferty died at 63. I loved the sound of that saxophone line on that song "Baker Street". Mick Karn also died. He was only 52 or so, which struck home because I am 51. I remember when Japan, his band, first came on the scene.

Tonight I will figure out something else to put on eBay. I'd like my spare room to be much more digital and empty of material objects.

I wonder if bones actually get tired enough to be considered "bone-tired", although I suspect that the term refers to a weariness that one can feel deep down in one's bones. I get bone tired when I exercise or hike in a really worthwhile way. I am glad that my deepest weariness often arises from leisure. 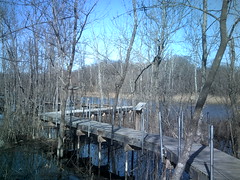 Tonight the Audubon magazine arrived, filled with photos from a photo contest. Today the woman who always is helpful at Boston Market wore her name tag: Amalia. Tonight we [i.e., my wife and I] watched a fascinating episode of a documentary series about Michelangelo's religious beliefs. My microphone sold for 30 dollars. I did not see "The Mourners" at the Dallas Museum of Art. Life is like a boardwalk over a wetlands.
Collapse