Everything goes easily the week after Christmas. The shopping frenzy ends. The roads prove surprisingly commutable. The telephone at work barely rings. The chill in the air seems entirely appropriate, like a warm blanket of cool.

My photographs during Christmas did not generate many keepers, but I did have prints made of a goodish few. I use the Snapfish thing through flickr, which allowed me to order 4 x 6 prints very inexpensively. I opted to pick them up at Wal-Greens, down the street, rather than have them mailed to me. This proved an excellent choice, as this saved money and was hassle-free.

It's fun to see which prints look better in print than on the monitor and which prints are not good enough when printed. I'll mail prints to family members, as it is my theory that tangible prints are good to have from time to time.

I did not feel like going out to eat for dinner, so I stopped by Kroger and picked up some things to cook. I had in mind a simple chicken breast, but everything was in laudably large quantities in the chicken line. I went instead with a very thin steak--one of those which costs just a few dollars and looks like a massive 1 mm. thick blue plate special, but tastes like a rough but ready version of real steak. I also picked up crookneck squash, little white potatoes, and clementines. I sauteed the steak in a pan, micro-waved the squash and potatoes, and ate the clementines without further preparation. The meal was not bad at all. The picture is less impressive: 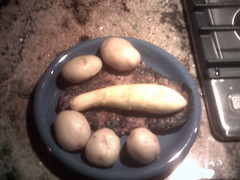 I like the two sisters in the story "Babette's Feast", who boil fish until it barely has a taste. I can understand that approach. My new chess clock and tournament director software arrived today in a box. I look forward to using each.

I enjoy my Droid phone because I can listen to last.fm on my radio, using an auxiliary cord. Tonight I played one of its "radio stations", which plays me its "recommendations". After I spent some time on the Hello Saferide station, listening to poppy Scandinavians, I listened to "gurdonark's recommendations". After a very nice Phillip Wilkerson, the station played Tom Heasley, a CD I own. I like it when on-line services are like radio psychics. The amazing Kreskin of the ether.

I read from a book about a man who studied a Canada goose in his beaver pond. I hope the fog rolls in as predicted tomorrow. I thought about fortune and misfortune and new years.
Collapse