We walked in our neighborhood, by the little park pond where wild ducks and park geese mixed and mingled. I read that the first wild snow geese arrived at Hagerman National Wildlife Reserve, a bit over an hour to our north.
These geese are always accompanied by the smaller Ross' geese, the bridesmaids of the white goose world.

Earlier, I stopped by the new Whole Food Market in Fairview. This provides this upscale but exurban area with its first upscale market. The folks in the place were like aging counter-cultural boomer hip kids at Halloween reaching into a barrel full of Kit Kat bars. I was originally going to have some lunch involving something whole grain or vegan, but thought better of it. I did weaken when I saw gingerbread men in little small packets at the bakery section. I ate some, but then I read the nutritional statement about fat content and felt heartily sorry for new wrongdoing today's communion service did not erase. I stopped by a place that announced it was both Paradise and a cafe/bakery, but the line was too long. So I settled for a Which/Which sandwich. which was tasty and quick. 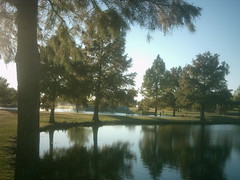 Later I walked by Bethany Lakes Park, where mallards and wood ducks enjoyed the warmth. Some stop over all winter, some move on to the Gulf Coast. I watched them swim and waddle.

I wrote an instrumental called "Berries", which the Classwar Karaoke folks kindly just placed on their compilation album "12":