Saturday morning I went on an Audubon Society birding walk at the Heard Natural Science Center in Fairview. When we walked on the boardwalk over the wetlands, we saw two lovely male red-headed woodpeckers, squabbling over bare tree territory. The bird banding people were banding a tufted titmouse. I felt a bit pleased when one made an escape prior to being weighed. 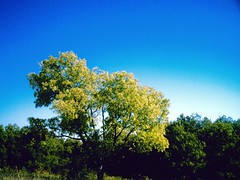 Sunday afternoon I took a young friend into downtown Dallas to see the Sixth Floor Museum. The Sixth Floor of the former Texas Book Depository is where Lee Harvey Oswald stood at the time of the assasination of President John F. Kennedy. I had not been to the museum in years and years. The still photos and films of that era combined with the setting were very interesting, though I noticed that the small, rather static museum had an admission charge commensurate with a much larger exhibition.

Our dog Beatrice is afraid of thunder. She awoke during a huge storm last night, barking strongly.
Collapse