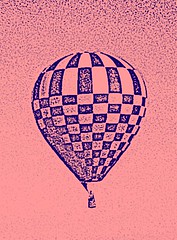 Today my young friend and I visited the Dallas World Aquarium. The sawtooth shark and the fluorescent poison frogs impressed me. The streets and cafes were filled with people in burnt orange or in red, because the fans of the University of Texas and the University of Oklahoma football teams were in evidence prior to a big game between the two teams. As many Texans attend OU, I noticed a marked lack of factionalism between the two camps, as when a pair of attractive young women walked side by side along a cafe sidewalk, one in UT regalia and the other in OU regalia.

We dined on Thai food. We talked about water moccassin snakes and shortwave radios. We ate a dessert of frozen yogurt.

After I dropped him off at his home, I ran two bookmooch books to the post office, and then watched sports. My wife and I went to eat seafood at Rockfish Grill. We saw a hot air balloon landing. We went to Borders book shop, where she bought the second book in the Stieg Larsson mysteries. I bought an issue of Sing Out! magazine. Then I used emusic credits to download an album by Over Sundet, a Danish group whose folk-ish but non-guitar-y and non-accordion-laden instrumentals intrigued me, all because I read a review in Sing Out!
Collapse