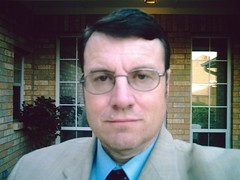 The heat broke tonight, following a trace of rainy weather. The temperature dipped into the 80s. We ate sushi at Blue Fish and sat outdoors, while a band with killer trombonist and lesser vocalists played their hearts out.

I won the 4th postal chess game in my current USCF tournament,giving me a 4 wins, zero losses record thus far. I have one opponent yet to face in two games, but he has not begun to play in this tournament. At schemingmind.com, I earned a draw in an endgame against a 1597 player [my own rating is 1861 at scheming mind], after using an unorthodox opening to get exactly nowhere.

Tonight one of my songs will be on internet radio at Stillstream as part of a cool compilation called Just Not Normal 100. My track will come on at about 4 in the morning Texas time or so--I don't think I can stay up that long.

I am in the mood to drive to endless grasslands, or fish for catfish under a midnight moon.
Collapse