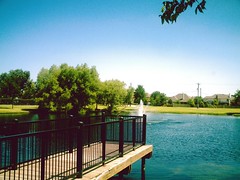 Sunday I arose early and took the dogs for a walk in the park. We saw a mockingbird harass a starling. I've noticed our neighborhood mockingbirds became very aggressive this nesting season. I fell asleep until 12:30 p.m. A passing jogger stopped to pet the dogs. They love their walks.

In the late afternoon I went for another walk in the park, by myself. I saw lots of scissortail flycatchers, little submerged sunfish, a grackle perched on a pier, half-grown ducklings and swooping swallows. I spent late yesterday afternoon trying to remix a song I created last Sunday, but after reaching the sixth draft I decided I liked my original version better than my revisions.

We ate supper at the Clay Pit with

tx_cronopio. We all three enjoyed the conversation. The waiter made two significant mistakes on the order, which is unusual. I decided, though, not to "take it out" on his gratuitity.
Collapse