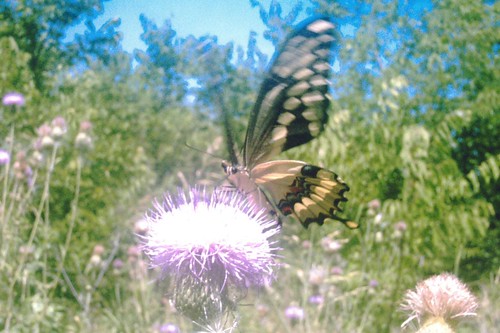 We went to Terra, the excellent Mediterranean restaurant in the new shopping area in our town. I particularly enjoyed the lamb kebabs. We sat outside, where a jazz band played for listeners who sit on a lawn set up for that purpose. The band had a great cool jazz sound, with a fine electric piano player (who, unfortunately, was pushed "up" in the mix, to the detriment of the electric bass). The singer/leader was more uneven. She tried to overpower Sade's "Smooth Operator", which gave me a personal busy signal. She did an excellent take on the pop chestnut "Route 66". Then she tried to do "Tainted Love" as a quiet torch song. Perhaps she does not realize that "Tainted Love" is itself a cover. I'd love to hear Ornette Coleman's cover of "Tainted Love".

We ate frozen yogurt after dinner at the place with the more "authentic" (i.e., less sweet) yogurt. I had banana frozen yogurt with graham cracker crumbs. Afterward, we drove home and walked our dogs. As we were nearing home, our neighbor we don't know very well from a few doors down came by with his rescue greyhound. "Have you seen a greyhound?", he asked, and soon all was learned. He and his wife had adopted a second greyhound, named Kelly. Kelly made a break for it when the house door was held open just a second too long. We soon saw Kelly, and set off to follow her down the side streets. I took the older greyhound, a handsome and patient fellow named Kidd.
Kidd's dog treats would feed our small dogs for a week. We finally saw Kelly on Canterbury Street, but she seemed oblivious to us. She kept on walking. My wife and I walked to the park, but did not see her. Then I joined the folks down the street and some greyhound folks they know in hunting Kelly in separate vehicles. At 11:30 p.m., I learned that Kelly was found, safe and sound. I love happy endings! 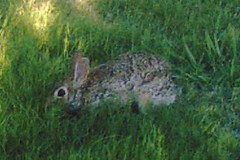 Today I did relaxing things. We went to Subway sandwiches. I ate a turkey sandwich, while my wife had them make a sandwich-as-salad. We just learned this month that Subway will make any sandwich into a salad. We drove to SPCA to donate a small animal carrier once used by our beloved departed dog Scout.
We walked among the cages of cats and puppies. One black kitten was so playful. Several older dogs were total sweethearts. One long-haired dachsund mix was just lovely. Another retriever had just had lot a leg, but he was happy. The McKinney SPCA is in a stylish building, with a great staff. It's "no kill", and the animals all looked happy, except for one lovely terrier so shy she hid under her little pallet in her cage.

We stopped by Shades of Green nursery, which has lots of native plants. I loved seeing two giant swallowtails cavorting among the flowers. Then we stopped by Callaway's, which had a large variety.

We called my dad and wished him a happy Father's Day. I want to go visit him soon.

I went for a walk around Glendover Park Pond. I looked through binoculars at swifts landing on the pond to catch insects. Mockingbirds and grackles called from the suburban trees, all guarding
nests. i saw a blue jay hide in the trees in the park. I used my binoculars to look at a catfish a man caught across the way.

On my way back home, I saw a bunny. He tried to stay still, very still, so that I would not see him. I saw him. My wife called her father late tonight, and told him how much he meant to her. We had a good, quiet day.

I helped grill the chicken tonight. My wife made a cool drench I applied just at the end of the process. She oven-roasted sliced new potatoes, and then we watched the show Treme on TV.
Collapse