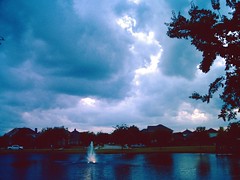 Two good novels and one good book of poems held my attention during this half of this month. Poet Jessica Goodfellow's "A Pilgrim's Guide to Chaos in the Heartland" offers poems filled with allusion, a fascination with science, and fun wordplay. I like that one can plunk down 10 dollars on a chapbook and meet new images and fun ideas. The centerpiece poem, using the prop of a drive through the midwestern tallgrass prairie states to ponder properties of the heart and the mind, works very well.

Monica Wood's"Any Bitter Thing" offers something I find all too rare these days--a densely-plotted, thoughtful, set of well-drawn characters, engaging the reader in a soothing, disturbing, resigned and redemptive meditation on faith and fragility. On a lighter note, "The Guernsey Literary and Potato Peel Pie Society", by Mary Ann Shaffer and Annie Burrows, uses the form of a 1920s-style light epistolary comic novel to tell the sobering tale of the German occupation of the Island of Guernsey during World War Two. Although I appreciate the notion that horrible tales cannot be baked into gingerbread, I like gingerbread. I found the novel deeply informative and yet good fun.

Our dog Bea is enrapt by the sight of bunnies next door. We have to bring her in at night, lest she go out the doggie door and bark in the dark. I'm gradually encircling a postal chess opponent in a rook and pawn endgame I am apt to win, even as another opponent just won a pawn in a Ruy Lopez in which I am already dangerously exposed to attack.

Yesterday I saw a meadowlark, his yellow clearly visible as he flew. This weekend I hope to visit Park Hill Prairie. The fiery skippers have returned to our back yard in force--I did not know I would miss them until they were delayed this year. A new bloom of daisies complements the pink and white of the crepe myrtle tree.

Tonight an area affected by the oil spill ran an ad about how it has much more than beaches. I hope I can find a weekend soon to go and see this Summer. I like the idea of being a tourist in a beach resort who avoids the beach. I would like to help in some way--perhaps that is a way.
Collapse