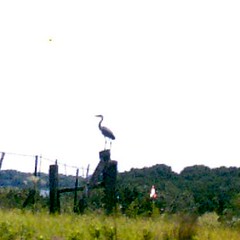 I dreamt I was a lawyer. I was at a Court of Appeals for the argument of an appeal. I looked down, and I had forgotten to wear my suit. I was wearing instead a lime-green casual button-up shirt. I do not own such a shirt now, though in my childhood I may have owned one. The argument was attended by hundreds upon hundreds of lawyers--far more than would be the case at an actual appellate argument. The appellate panel of judges was far in the distance of a large, lunchroom-style cafeteria-shaped courtroom. I could not hear the court from the back of the huge courtroom. I could not hear which cases were being called. i was called away for several minutes on some kind of errand, and when I returned, I was not sure if my case had already been called, or still remained to be called. The dream was not particularly realistic, except that it felt a little like high school or college. I know almost exactly what particular daily concern led me to have this dream.

I like the way that herons hunt and fish. They stand attentively, whether looking in a field or over a shallow water. Then they strike, swiftly, cleanly and often successfully.

I am still puzzling over one of my postal chess games on-line. I have been holding the advantage in the game, the white side of a Stonewall Attack, since I won a pawn early in. Yet I thought yesterday I had launched an attack that would lead to checkmate. Later, I found that I am only likely to win another pawn. I am a bit uncertain how I miscalculated.

We got a little rain yesterday, which reduced the heat a bit. I'm glad of the relief.
Collapse