Sunday afternoon one of my wife's co-workers was kind enough to ask us to his annual Memorial Day get-together. We spent five hours there, which is perhaps three hours more than my socialize-with-strangers sell-by time. Yet the food was good, the seating was in a wooded back yard with lots of birds and butterflies, and the people were interesting. The theme was "roadkill", not as a food choice, but as a kind of low-rent costumery.

Some people at the function were involved in community theater. A few fellows were quite interested in show tunes at this party. One explained how he had 300 mp3s from Broadway on his iPod, but no Bernadette Peters. A woman explained how she got sabotaged in a local play she directed by someone going over her head to the board of the non-profit over a matter of costume headgear. People proved au courant on show trivia hitherto unknown to me, such as last year's Tony episode, ins and outs of the local chorale, which restaurants featured show tune nights, and the fate of various Broadway plays. I ate brownies from which I should have abstained, but otherwise came through the ordeal in good shape, largely because the people were pleasant. Also, as with orchids and pre-Raphaelites, I like that there is a great deal more detail than one can ever imagine as to any given topic.

Today at 8:05 a.m. I decided to walk the 10 mile walk on Trinity Trail from the Brockdale trailhead round-trip to Collin Park. I used a little inexpensive Argus camera from which I took 415 digital snaps. They came out with a look I liked. 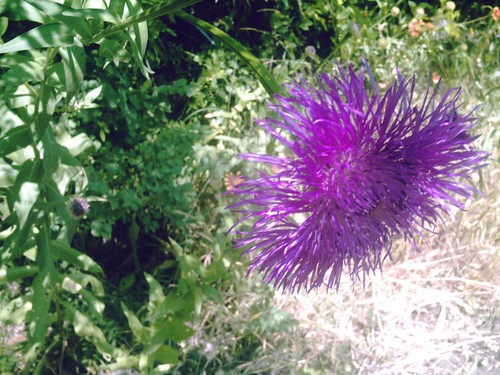 I saw a painted bunting bird, a tri-color friend, but was unable to get a snap of him. I did see virtually every kind of swallowtail butterfly from our region, as well as a tortoise, a low-flying turkey vulture [I do not think his bell tolled for me], and a Cooper's hawk. The trail was alive with wildflowers--Mexican hat, blanketflower and primrose, as well as some native hibiscus and what I believe would be a form of wild rock rose. Cardinals and mockingbirds abounded. The hike took until 1:55 p.m., nearly six hours, counting the stop-over for soda and suntan lotion at Collin Park.

Tonight we had minute steaks cooked in London broil style. I edited my 415 photos to 90 or so for a flickr set. I got the good news that the Classwar Karaoke project included my song "Walking by Trees" on their new compilation [Volume 10], so I put together a 3 minute youtube of my 6 hour hike accompanied by the new song, and posted it. I had a good, thoughtful, quiet day. I upgraded my anvil studio for VST instruments, so that I can use it as I used it on my old computer.