I met the group from the Prairie and Timbers Audubon Society 8 a.m. at Oak Point Preserve. We took a two hour bird walk together. I counted about 18 people on the walk. The morning started out quite chilly, but warmed considerably during the walk. We saw lots of Cooper's hawks and red-shouldered hawks. We saw dozens upon dozens of cormorants, and a few gadwell ducks. In the riparian woodlands we saw new Spring flowers, including this grape hyacinth: 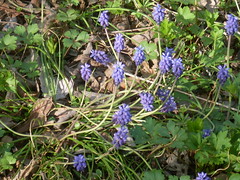 I liked the downy woodpeckers. I like that the yellow-rumped warbler bears a name that reflects truth in advertising. I like watching serious birders try to tie down a species for the many very-nearly-identical sparrow species. I like that I and another birder could lose the group and then link up later. The other birders were so nice and friendly. We had a great time. At hike's end, they counted up their day list of birds, and reached 36 species of birds. I probably saw about 30 species. I felt good that I could identify so many. I feel that in 2 weeks that park will be full of migratory songbirds and more wildflowers.

My wife and I went to pick up her car from the service bay of the dealership. Then she drove us to Denison, a small city an hour north of us, on the Oklahoma border. We attended Denison's Spring Art Festival. We really enjoyed seeing the galleries, as well as the railroad museum. We ate BBQ brisket sandwiches as good as any we had in years. We saw some great pictures and sculptures, in a range of styles. Gallery owners and artists alike talked to us about what we saw. I did not buy any paintings. I did buy a maple top done by an artist, several artistic note cards, and the railroad museum's coolest souvenir, a Missouri Texas Kansas railway baseball cap. The couple of folks in the small railroad museum made it come alive for us. We were grateful.
Near the museum, we appreciated the Distant Light gallery, whose SPBOM exhibition [shoes-panties-bra-oh-my] took a whimsical take at its subject matter, featuring a lot of cool student work by students at Grayson College. Their professor curated the show. He had a good sense of humor.

I was heartbroken that the great used bookstore on Main Street is out of business. I spent many a happy hour there. But I did see this great truck: 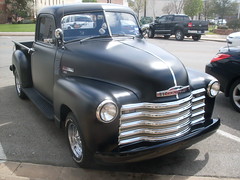 A truck is hardly a bookstore, but we find what comforts we can.

Thunder clouds forebode while we drove home, but no rain fell. I have an issue of Asimov's sci fi magazine in hand, ready to face the evening.
Collapse