I thought I saw a western kingbird as I drove down Landsford Street to our home. That would be early, I imagine, though the bradford pears which line our neighborhood went from flower to leaf this week. We drove my wife's car to the Nissan place for routine service and the ate at Rockfish Grill. I had the catfish, with roasted potatoes and steamed vegetables.

Tonight we watched Jane Campion's film "Bright Star" about the romance between the poet John Keats and Fanny Brawne. I'm usually quite partial to Jane Campion films, but this is my favorite among them. I visited the Keats house when I was 20. It made an impression on me then, but a different depth of impression. I like poetry very well and have some modest half-literacy in it, and yet I fear that I have read not nearly half of a tenth of enough. I understood only a fraction of what I have read.

Now, though, I am listening to covers of the Cure song "Just like heaven' on last.fm. I began with Kate Melua's, and then moved on to Charlotte Martin's. I am about to find a third cover--and say goodnight with an image from a rough stop-action I am [slowly] making: 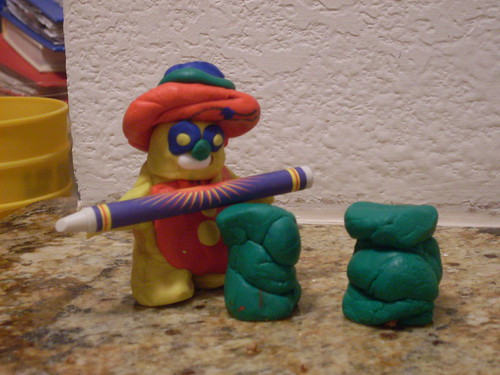