"It's such a fine line between stupid, and clever"--from This is Spinal Tap, screenwriters Reiner, Mckean, Guest and Shearer.

This morning I went to the earlier morning service at church, where I was pleased that the hymns included "Blessed Assurance", though it was possible my pleasure was unilateral, as few other people seemed to be singing. The sermon was about how folks could reach out a bit more to other people, which always strikes me as a good idea. If I were a minister,I think my sermon text would always hover between the Good Samaritan and the multipying of the loaves and fish.

I drove to a nearby rural Collin County city, passing dozens of seagulls on the lake. I picked up a young friend and drove into Dallas. We shopped at Good Records on lower Greenville, where I bought a CD by the wonderful solo guitarist, the late John Fahey. Then we went to downtown to the Trammell Crow Museum of Asian Art, which had the intriuging and coloful cartoon-like paintings by Yang Jin Long, as well as the permanent collection of Chinese, Indian, and Nepalese antiquities. We stopped by a Half-priced Books on Campbell in Richardson, where time did not permit us to do its extensive holdings justice. I remember seeing the last issue of a rock magazine, whose rather hipster tone "represented". [a list of bands the author hated without having heard was not as funny as intended, and the list of bands for whose bands the author felt sorry made me sorry for the author, a little]. The magazine's content gave me clues to some reasons for its demise. We then stopped by Yogurtville in Allen, where we each assembled masterfully artistic yogurt desserts at the build-your-own eatery.

On the way home, I drove past chickens, cows and horses on the Old Mill Road, listening to experimental solo acoustic guitar music. 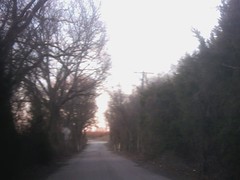