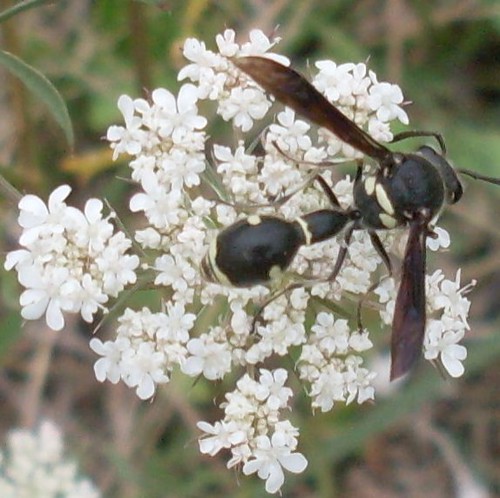 Today I saw a dirt dauber, also known as a mud dauber. It gave its attention to an October wildflower at Erwin Park. I like that although a dirt dauber is a wasp capable of a serviceable sting just like any other wasp,
dirt daubers don't sting people unless they are mistreated. They reserve their sting for black widow spiders and other related species.

As I drove to exit Erwin Park in McKinney today, I saw a wild tarantula crossing the road. I wanted to stop and get a closer look (as he might indeed have been a huge wolf spider, I suppose), but a car was coming behind me.
With hindsight, I wish I had pulled over and waited to get a chance to inspect him closely. The Texas brown tarantula is fairly common, though I don't generally see them, and its bite is not lethal. It's a cool-looking creature.

I listened to the music of Nurykabe, who writes songs for free video games, and watched a blue jay through binoulars. Blue jays have that distinctive "jay! jay!" cry which reverberates through the woods. One shrub-tree had red berries, which I suppose were holly but looked almost like red muscadines.

I worked a bit today. I thought of silly things I have done or said. I counted what I spent on food. I laundered, and rested, and wondered what all the horse trailers did at the Myers Event Center today.
Collapse