I rose early, drove a while to a friend's house, and then drove to Bonham State Park for a burst of fishing.
We caught but a single sunfish apiece, but had a very good time. We watched dozens of vultures circle. We watched hawks on posts and wires. We saw boy scouts try their luck at fishing. We saw orb spiders before we abandoned the trail as too muddy. We visited thrift stores in Bonham, and also the 1840s historic Fort Inglish display of cabins, and then drove towards McKinney. I was pleased that the free-download heavy metal music I chose sufficed. The best track, I think, was a folk metal track from a band from Germany which seemed to blend riffs with a kind of Gaelic sound.

We stopped in the small town of Trenton, where a car show was being held. We surveyed a small line of vintage trucks and power cars. 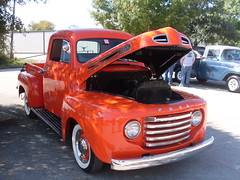 We went to a Fuddrucker's where I was intrigued to find that ostrich burgers, salmon burgers, turkey burgers and bison burgers have been added to the menu. I had a turkey burger, while my friend had a salmon burger.
We then stopped in Good Will in McKinney, but bought nothing. Then we stopped by the World War Two Prisoner of War camp in Princeton, which is more of a saga than an actual display. I imagined Wehrmacht soldiers captured in France and airlifted to rural agricultural north Texas to work on farms.

We called it a day, whereupon I watched football on television and then took my car to the fancy car wash place. My wife and I dined on sushi, miso and edamame. One of our neighbors had Diwali lights up. I wondered about accumulation and accretion and dispersal and donation.
Collapse