We met our friends Scott and Donna at the Clay Pit restaurant. The Clay Pit featured a special "Taste of Mumbai" buffet, complete with a fellow who made dhosas "while you wait", omelette-style. I managed to avoid the worst temptations and excesses of this endeavor, and to eat largely non-creamy foods. We always enjoy the good conversation with our friends. Scott and Donna made me a gift of a small quantity of heavenly French macaroons, including some pumpkin macaroons.

I then drove to my office, where a helpful co-worker carried a laboring oar in getting work finalized. I drove to Oak Point Nature Preserve to get some exercise. The sky was dreary and hinting at rain, and the temperature was in the pleasant but chilly high 50s/low 60s. Recent rain had covered some of the walking path, but I negotiated around it in good shape.

Overhead I saw a red-tailed hawk being harried by a crow. The crow's fervent "caws!" echoed off the clouds. As is the way of such encounters, the crow's greater agility allowed it to approach the hawk and make quick contacts. As is also the way of such encounters, the hawk beat a steady, unconcerned simple retreat, keeping an eye open to see if the tables could be turned. The crow, for its part, could not engage to enemy too directly, for the enemy was, after all, a large hawk. I later saw another hawk gliding sedately in mid-air, enjoying the day.

I saw some yellow flowers, and I watched two American coots swim in a small lake. They are shy of people, but not morbidly shy, so that I could get quite a good view of them.

My wife went to a movie with a friend. I settled in at the local BBQ restaurant to eat a pulled pork sandwich and brunswick stew, with a book on the classical mandolin in hand. My book perusal was interrupted by a football game on television which caught my attention. I went to Big Lots to hunt a 10 dollar mp3 player, as a friend wishes to get some Creative Commons heavy metal songs, and I thought a player is much more fun than a CD. But Big Lots' sale was not as good as I will find elsewhere, so I shelved the plan for now.

I read about a man who was a journalist in Baltimore and a writer of vaudeville songs, but ended up dying at 49 in Los Angeles after assisting on silent movie screenplays. Life is full of second, third and fourth acts. 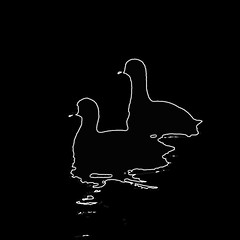 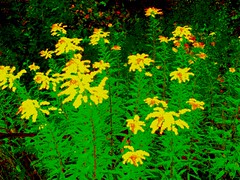 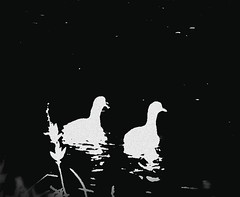 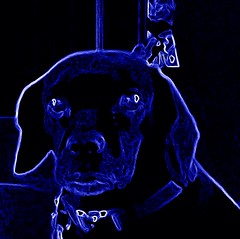