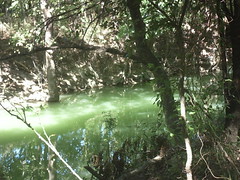 A period novel about Los Angeles in the 1970s by the author of "Whistle Stop". A blue jay in a tree. A roast beef sandwich, on wheat, with provolone cheese and lettuce "only". A finesse in an on-line postal chess game.
A cinnamon roll which turns out to be "lemon cake" instead of yeast. A flowing creek. A glimpse of a flying hawk. The moon and the planet Jupiter. A banana. A website about puggles. A Facebook invitation from a kid I went to high school with, now a cross-country and tennis college coach. Noticing that the upcoming college football game at the new Cowboys stadium, featuring my alma mater, costs 250 dollars for two tickets to attend.
A cat-tail. A radio show telling about how Prokofiev played chess and competed with great grandmasters like Capablanca and Emanuel Lasker. Thinking about learning the programming language called C#. Wondering what the near future will hold.
Collapse