A fellow in the newspaper uses shredded bills and such to make masks, but I use photo filters. 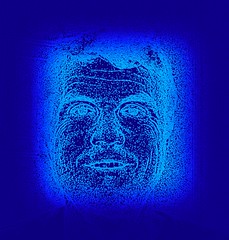 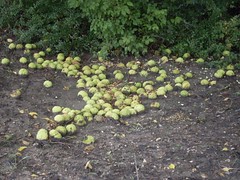 Today the rain continued, making for a quiet day. I watched the professional football game on television, and ate a barbecue sandwich from Barbecuties, along with brunswick stew.

I have been recording simple sound samples for use in my software synthesizers. This weekend I have recorded thus far:
a. the ocarina from Boulder;
b. an Irish whistle;
c. a root beer bottle with water in it, upon which I blow;
d. a red flute from India;
e. a flute I bought in Costa Rica;
f. a wooden recorder;
g. plastic recorders;
h. the sound of a small mallet striking an xmas holiday mistletoe wind chime;
i. a child's native American flute;
j. the sound of a mallet striking a wine goblet; and
i. a wooden toy train whistle.

These all combine to give me a rich palette of sounds to use in Sawcutter and Tunafish, the two sampling software sequencers I use to make electronic music.

I drove to Good Will and bought a used book. Then I stopped by the Chisholm Trail walking path in Plano. The Osage Orange, fruit of the Bois D'Arc tree, had fallen in the rain. The water was up in the little creek. Blue jays made their blue jay noise, while barn swallows flew. 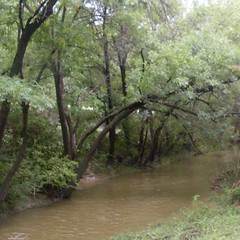 On the drive home, I stopped by the Fiesta Market for macaroons. Then I stopped by the new comic store in Allen, called When Nerds Collide. I bought two graphic novels, one by Eddie Campbell called "The Fate of the Artist" and one by Harvey Pekar about the Beats.
Collapse