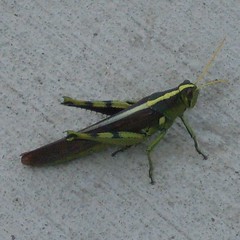 The sermon this morning at the 8:15 a.m. service dealt with the golden rule, which would, in my view, be a fitting sermon topic for almost every sermon. After church, I came home and slept a bit, before gathering us
sandwiches from Whichwhich.

This afternoon I went to Oak Point Nature Preserve in Plano. Monarchs flew their slow, lazy September flight,
amid late Summer flower blooms. Off in the distance, at the nearby Plano Amphitheatre, the September to Remember rock festival, some 15 local bands in an all-ages concert, provided an amplified accopmaniment to the nature sounds. As with most such events, the mix did not make a good impression when carried a few acres away. One band playing power punk meets alternative rock with a good female vocalist had a curious second vocalist with a louder amp and a shouted kind of Texan Jello Biafra vocal timbre, creating an impression which can be roughly analogized to Flavor Flav breaking into a Fairport Convention song with a call to root for something called the Mean Green football team, though the analogy is of course non-literal.

I did not see much wildlife in the heat of the day, but I did spot a gorgeous little least flycatcher amid the trees. He did not express an opinion about the music. He did evidence the right wing coloration when I double checked the bird book.

I visited a latino-oriented grocery and bought bakery macaroons. I stopped by Half-priced books and bought a set of 50 cent literary magazines about the intersection of art, religion and mystery, as well as a photo biography of Glenn Gould and a Rough Guide to world music. I visited US Toys because I wanted to get more little wooden mallets for field recording, and realized that I could do so inexpensively by buying little toy guiros with the mallet included. On the drive home, I listened to a recording of Hector Villa-Lobos' solo guitar pieces. I like their melange of Brazilian folk and classical ideas. I chewed a blue candy cigar chewing gum I bought at the toy store.

My wife is feeling better, and watching "The Philadelphia Story". I'm pleased to have another day off ahead.
Collapse