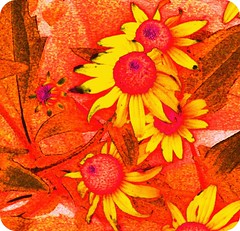 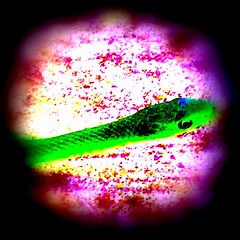 My own contribution is called "Rough Green Snake". As with most of my music, my worry was that it was not sufficiently abnormal for the experimental taste, but insufficiently normal for the mainstream taste. But the fun of being a hobbyist musician is that you can just accept your limitations, try to learn from the wide gap between what you imagine, and what you can do, and move on. Here's my piece, in a widget that will play when clicked:

I think the "gap" between aspiration and applied science is also true of keeping a weblog. Over these many years, I find that sometimes I write things that bore people. Sometimes I write things that even irritate. I've even had a rare moment or two of LJ drama--the most amusing, in hindsight, was with the one lj friend with whom I had discussed how neither of us ever would take something seriously enough to have LJ drama. Once in a while I've lost an LJ friend I'd rather have kept; more rarely I've kept one on I might better have not kept on; always I could have done more to be a better writer, a better proofreader, a better person. It's the universal story of weblogs. Overall, my weblog has been a redeeming and re-defining thing.

There's this gap between the kind of friend, the kind of person, I'd like to be, and the kind of person I am. But all I know to do is mind the gap, learn, adjust to and learn from all manners of friending and unfriending, and also, I learn to revise typos. My LJ is the massive inspiration engine for many hobby endeavors, all pursued, like this LJ, less with expertise than with enthusiasm.
Collapse