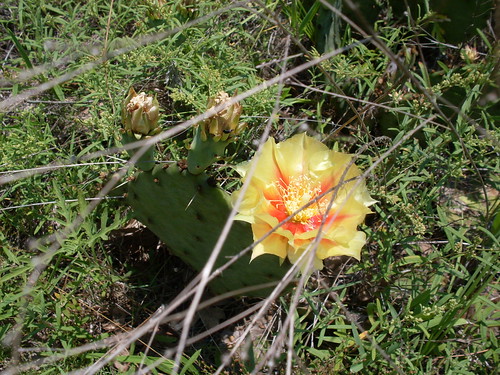 My sister and her husband, who live in Alabama, stay with us this weekend. We enjoyed having dinner with them last night at San Miguel Mexican restaurant, and then saw them off when they went to hear a friend speak in Midlothian.

Today I visited Lake Ray Roberts, located in the cross-timbers region about an hour and fifteen minutes northwest of us. I walked the sidewalk trail through the woods. I saw prickly pear in bloom, and these Chickasaw wild plums in berry: 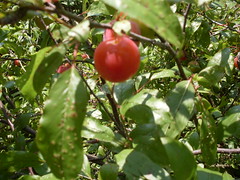 I watched a set of chickadees jump from branch to branch, and heard their vibrant chickadee cry.

The lake features a swimming beach. Many people congregated on the sidewalks and parking areas nearby. I witnessed one toddler boy call for his young mother's help because the boy managed to slip his foot from a plastic pullover shoe. The mother quite wisely pointed out that the lad possessed the ability to put it back on. A small church in a nearby town featured a sign which said "Common sense is wisdom with its sleeves rolled up". Another boy of few years assured his mother that the boy suffered from a nosebleed, but the mother pointed out that the color of the effusion proved to be other than red, and less than suitable for sharing.

In one wooded section, Spring grasshoppers thripped in the grass, making a sound resembling the sound of a thousand tiny acorns gliding to earth. I drove past a field of longhorn cows whose horns looked long enough to be parodies of cowboy stories. I listened to the BBC re-tell the same four facts and surmises about the pseudo-election in Iran. I watched two starlings bathe in a puddle.

I stopped at Clark's Barbecue in Tioga, where I had a brisket sandwich, red beans, and collard greens. I read a vintage book about Lake Louise in Canada, an area I've long wished to visit. I crossed by the broad lake dam for Lake Ray Roberts. I thought about the nature of happiness and contentment. I slept until nearly noon before my day began.
Collapse