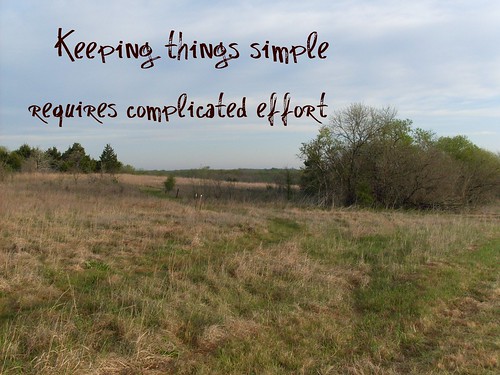 I like the way that living life makes things so complicated. If one gets used to eating a moon pie regularly, then one cannot imagine a world in which one forsakes moon pies. Some people still worry about whether a morning coat will suffice when protocol calls for a morning coat. A new puppy must be of a special breed (despite the very real costs to society) as opposed to a hybrid, or all is lost.

I read that once a prairie has been plowed up, it is very hard to repatriate the field as a prairie again. So many complex interactions take place that cannot be recreated by merely planting anew. Similarly, though thrift comes fairly easily to those raised to practice it, it can be surprisingly difficult for those unused to its ways.

A whole cottage industry of self-help books arose about how we should all make life much more simple. I applaud that idea, though in practice I have known people who made life more complicated than it otherwise needs to be, all in the name of simplicity.

I wonder, sometimes, if it's not like this weight-watching business.
One chooses the virtues one wishes to practice, and chooses to practice them in the most achievable way possible. This is not because one is a saint or a paragon, but because one is simply too flawed to practice exotic virtues in exotic ways. This notion has the advantage that all of my many flaws seem remarkably simple and
direct. Perhaps my virtues could take a similarly direct path. Granted, I'd lose all the manifold advantages of detailed ideology. But I suspect I can live through that.