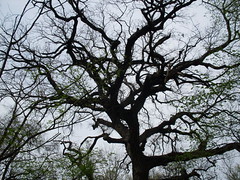 Above I embedded a photo I took of a Burr Oak tree, whose seed first planted in the 18th Century. I like things "older than grandpa"--like the endlessly-splitting paramecium or
five p.m. pastries at a doughnut shop. I like thrift stores because they similarly capture a vintage feel, even if vintage in this context means 1968, a time within my living memory.

I like sheet music from the era 1880 to 1920. Thousands upon thousands of songs nobody plays anymore. They become faded memories in melodic form. I thought to myself today how I generally dislike asking questions because I hate to put upon people the burden of an answer. Yet an old forgotten song or novel or poem appears like an answer to a hundred half-remembered questions. I think that sometimes one has to seek them out, like hiking near a burr oak, because they are there and they speak a forgotten language, on the edge of a daydream.

I love when a warbler is on a burr oak. It's tiny, insignificant, and then its song is the size of a massive tree. The song passes as the seasons pass. The bare trees remain in the winter.
Collapse