South of the City of Dallas a huge wetlands urban hardwood forest exists. The forest went untended for years, being used mostly as a place of illegal waste dumps. Yet it harbors diverse plant and animal life.

Last year they opened an Audubon Center in the forest. My wife and I went to see it today. It's got a huge modern building, with all sorts of green aspects, including a rooftop planting. Its shaped like a giant bird, so that passing planes will see its avian characteristics. They've created great trails upon which to walk, including one with an elaborate small bird blind shack from which we watched serene coots being coots.

I was glad to see this place for several reasons:
a. it's great to see any landfill converted into a nature park. I had seen this before in southern California, and it's great to see it happen here. Green jobs, green parks, reclamation of life from the shadow of polluted death.
b. it's great to see a major project developed in an impoverished, largely minority part of Dallas. I am so bored of metaphorically seeing only potholes in the wealthy parts of the city get fixed.
c. any place filled with singing cardinal birds and stark Texas woodlands makes me pleased. We did not see any rare birds--just sparrows and coots and killdeer and cardinals. But we sure enjoyed the place. 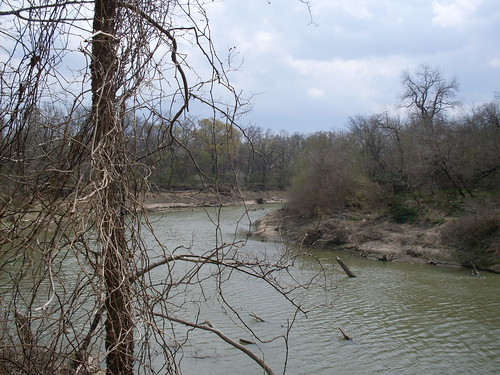 We had a great time, and then we had great Vietnamese food, along with a little dessert from a Chinese bakery of bean curd rolls.

Tonight we went to Garland for a Texas Independence Day party hosted by a lawyer I know from the Garland Bar and his wife. We had a great time listening to the stories people told, ranging from war stories from criminal cases to a bright woman's description of re-tooling after losing a job in the securities industry.

I learned today that the Lone Star flag is the third flag of Texas independence, and that the first two flags featured a single star on a blue field. I learned today that poison ivy loses its leaves over-winter, leading to a new mnemonic for spotting it in its winter state--"plant is hairy/pretty scary".

I also paid up my library fine, and made peace with myself.
Collapse